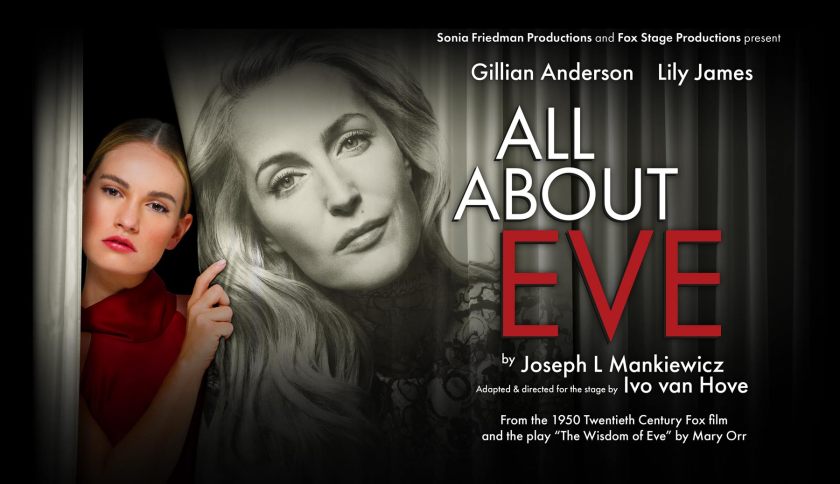 There are some spoilers below but at the time of writing, the play’s run has ended and the film is 70 years old.

Playing at the Noel Coward theatre in London, this is based on an Oscar winning movie from 1950 by Joseph L. Mankiewicz and starring the inimitable Bette Davis alongside Celeste Holm, Anne Baxter (as Eve) and the vastly underrated Thelma Ritter.

It may have been written as a screenplay but it was ripe for adaptation to the stage given it’s subject matter. The play opens with Margo (Gillian Anderson) having just come off stage to be introduced by her friend Karen (Monica Dolan) to the ‘mousy girl in the trench coat’, Eve (Lily James). Eve is Margo’s biggest fan; she’s been at the stage door every night and attended every performance of her current production. Eve quickly, but a little implausibly, inveigles herself into every aspect of Margo’s life, making herself indispensable. Seemingly naïve at first, it slowly becomes obvious that Eve is very cynical, she has a plan and is playing the long game to attain her dream.

I felt that the play pushes the psychological aspect of the story further to the fore than the movie did and the stage production in particular reinforces that. Directed by the person responsible for ‘Lazarus’ a few years ago, Ivo van Hove, it’s no surprise that the staging is much different from what you’d expect in the West End. At key moments, usually larger gatherings and in one of the off-stage rooms (kitchen and bathroom), 2 camera-people mingle with the cast to get very close in on the action; a section at the back of the stage is where this extra bit of action is projected. There’s also a camera in the dressing table mirror so the actress’s faces can be seen by the audience. However, pre-shot footage from the mirror is also used to great effect in a few instances where we get the psychological take on the subjects’ state of mind.

The famous party scene (‘Fasten your seatbelts…’) is both hysterical (and shocking) where Margo gets increasingly paralytic and the party descends from polite, and a bit catty, to an embarrassing and unmitigated disaster.

Some of the UK casts’ British accents seemed a little ropey and ‘stagey’; I found it odd that Stanley Townsend chose a Southern accent for Addison Dewitt rather than go for the archetypal British villain sound executed by George Sanders.

It was a real privilege to see Gillian Anderson & Lily James on stage, Gillian exudes class but she’s not afraid to get her hands dirty in a fully-fledged and complex character such as Margo. As Eve, Lily James could easily taken the role from initially overly sweet and obsequious to the cartoonish, swivel-eyed sociopath but she manages to reign it in just to the point where both aspects of the character are portrayed more subtly and believably.

This site uses Akismet to reduce spam. Learn how your comment data is processed.